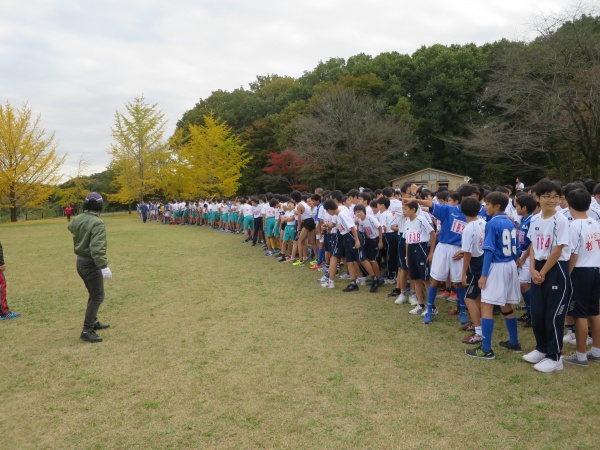 The annual marathon for Seijo students was held at Shinrin Koen Park in Saitama Prefecture. At first, many students warmed up while the teachers helped bring out water bottles. The teachers also passed around walkie-talkies to stay in touch when they would move to their assigned checkpoints. After a short speech, our principal Kurihara-sensei fired a small pistol, and the junior high school students took off! They were joined by Bettie-sensei in the marathon whereas Inaba-sensei and I jogged with the students at the back. The park was huge, and since it is November, we were able to see all the beauty of the autumn season. Many trees had different coloured barks, and the leaves were found in shades of green, red, brown, and yellow. As we ran, we could also hear many birds chirping in the distance and although there were many students, there was very little noise and it was quiet on the track. I saw some junior high school students struggling but they did their best, and they motivated each other to keep going until the end. It was nice to see all the teachers at the checkpoints because they would also encourage us to keep going and wish us good luck. At one point, a small train passed us and it was filled with children from a kindergarten school who wished us all good luck as we ran! It was cute, and helped energize the students. I made sure to take as many photos with my camera as I could. After half an hour, the senior high school students started their run, and it was very impressive to see how quickly they caught up to us. Many of them are athletes but even the students that do not run regularly were very far ahead. The junior students used their senpais as a goal and so did their best to finish the marathon as well. Many of the visitors in the park wished us good luck as they walked by us, and they seemed very happy to see us all participating in the marathon. As we neared the end, I was able to hear much more noise, since everyone had gathered at the sports ground. Teachers were shouting there because it was the last part of the marathon and the students needed all the energy and motivation they could get. Many students immediately sat down, started drinking lots of water, and recovered from the tough 10 km run. Teachers were eating lunches that were brought for them in bento boxes. Many students and teachers were also talking to each other casually, and they were having a lot of fun. After everyone finished the run, we had a closing ceremony where the top 3 runners from each group were awarded prizes by Kurihara-sensei. It was a great accomplishment and the students deserve to be proud of their results. It was a tiring day but it was worth it, and I would definitely do it again. It was really nice to see the students and teachers outside of school, and to be in such a beautiful park.   Aashish Balaji